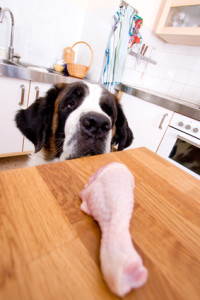 Why do people feed their dogs raw food?

Why do some people believe in raw food for dogs? This is one of those topics that gets animal lovers all heated up.  Some canine owners very strongly oppose giving raw meat to their precious pets.  But there seems to be a counter revolution amongst at least some owners of domesticated animals – those who believe it is natural to feed their Labrador or their Persian puss-cat a nice raw steak or an uncooked fillet of chicken.   So let’s look at the argument for feeding raw foods to the canine and feline species.

Proponents of raw food for dogs, for example, would say that it’s a matter of fact that wolves eat raw meat in the wild, and that since dogs have evolved from wolves, it is their right to eat the same food as their ancestors.  It is only with man’s interference in taming and breeding, so that he may have a loyal four legged friend, that the dog has imposed upon it a diet of cooked – and usually processed – food.  And anybody who has ever owned a cat and a goldfish knows just how much kitty wants to eat the fish!

Some of the benefits put forward by devotees of raw feeding, includes fitter dogs, which means lower vet bills.  Puppies fed on raw food appear to develop at a slower rate and grow healthier as a result of a natural diet.  Doggy breath is non-existent in raw food fed dogs.  Chewing of raw food strengthens the neck and jaw muscles and improves dental health.  And believe it or not, some pet owners say that dogs that eat raw meat actually poop less!  So you might get away without taking out the pooper scooper, every time you take Lassie for a walk.

Commercial dog food is packed with additives, dyes and salt.  It is made to taste fantastic, leading the poor addicted dog to overeat and become obese; a bit like we humans you might say!

There is, though, some worry that raw feed can cause bacterial disease, such as salmonella.

At the end of the day, the choice to feed or not to feed raw food to domesticated animals is yours alone, as the pet owner.  There is little scientific evidence available to support either menu.  Some people chose a vegetarian diet for their pet.  And as we know, pet food manufacturers are even offering krill oil for dogs, as well as olive oil and other types of oil for dogs.  Both of these topics are subjects of other posts on this blog, so be sure to get the full story.

Dog Food: Finding the Best One For Your Pet